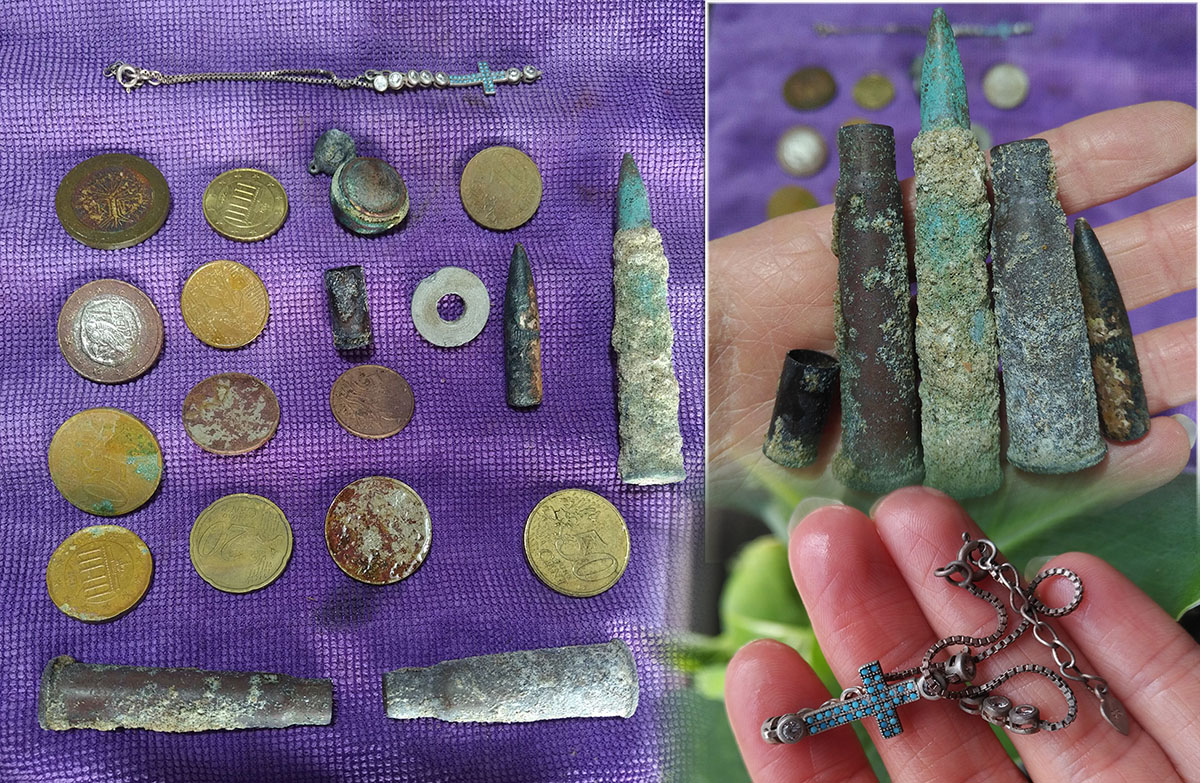 I hadn’t been to the coast for a few months, since it was bad weather, and I had a temp job which I was happy to leave behind after 3 weeks. I had a need to be out on the beach so I went for 2 days, and I hoped that the sand that had built up would have gone a bit so I could find as much as previous year May. Alas..

First 3 hrs with the Equinox

As i was in a hurry and didn’t feel like putting on the Excalibur harness over my big coat, I took out the Equinox which comes in one piece, unlike my 3-piece Excalibur which needs lots of preparation :p The downside came afterwards when my arm started to hurt in 2 hrs.

Found 4 euro in 6 pieces on the dry sand. The tide was very low but i usually go out to the water and lose about 2 hrs finding nothing and/or old crap.
I went back to get my Excalibur with the 14 inch NEL coil and found the bullet near the waterline and the dry sand. Weird. Seems some old stuff is coming to the surface again.

Day 2 was hopeless. I found 10 cents and the bullet point near the towerhouse where a good patch was last year. Found 2 old Belgian coins there too.
Day 3 – it started to give some icy rain in almost horizontal direction the second I set foot on the beach :/ Went around for an hour, found 10 cent again. Eyeballed the bracelet which looked red so I thought it was copper with silver plate but after I got home and cleaned it, it turned out to be some quite nice real silver (has 2x 925 hallmark). So yay for my eyes, not the detector :/ Doh. The Equinox was killing me even after half an hour on the last day. I was amazed for not having any muscle ache after the 2x 3 hrs of detecting in the first 2 days. Even my left arm hurt during detecting from holding the scoop. I’m out of fitness, I guess. HAd to stop quite often to just be panting, and also to try to get a more comfortable grip on the Equinox but it’s an absolute horror for me. Yes, I know I’m the only person in the world that cannot swing an Equinox. Everyone else is of decent size. Strangely enough, I didn’t have as much problems swinging a 13″ Deus coil over the beach for 6 hrs, something some grown ass men complain about. I need to change the Nox’ shaft if I want to keep using it once in a while, because THIS is impossible to live with.

Since I have been going around on the beach for a year and didn’t really feel like it was working out as much as i wanted, I decided to sell at least one of my Minelab beach detectors, see next post.

I was thinking about getting myself a 3D printer a while ago, but then didn’t after I read about all the problems and also the fact I don’t how to make 3D-designs. A few weeks ago I had the same idea again, in combination with a cooperation with my search mate, who is also into making things and he already worked with 3D-designs before. So I ordered the Creality Ender 3 v2 with some extra upgrades (Unicorn tube an springs) to arrive at his house and he got 2 weeks to put it together and to fiddle with it. I didn’t want to start it because I was afraid I would throw the thing out of the window with my lack of patience. Two weeks later, he brought the printer here while he had to study for his course. It took me 2 days to get the PETG to stick properly in all directions and also to design and test my first cable guide for the coil cable with a 45-degree angle. There are several of thosewith a straight guide that you can download from internet, or buy from Ebay etc.. but the cable usually doesn’t run in a straight line alone your shaft. Took me two tutorial videos on Tinkercad and there you go, my first design ! It needed lots of corrections but I’m almost there. I figured it can be used for cables going in both directions around the shaft. If it doesn’t fit, just turn it aroundf.. Boy, did that NOT work lol.
I also downloaded the Minelab Equinox coil support because it’s just a horrible 19th Century design, not ergonomic and the coil ears tend to break easily. This support divides any pressure over the coil itself so it’s not just pushing on the two ears.

My first 2 attempts weren’t very great because the print let go of the bed after a few layers, but I fixed it this morning and printed the whole thing in one go 😀 So second thing I had to solve was to get rid of the supports. The hole in the ears was almost solid print and PETG is quite hard, so i drilled them out, but I am now trying a new print without any support in the holes. If that fails, I will have printed 1.5hr for nothing lol.